Art of the 20th century


"The Second Temple of Beauty" 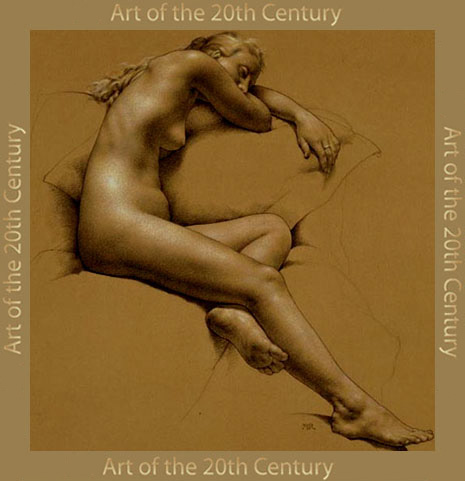 The depiction of nudity in art has generally conformed — with some variation — to social standards for public nudity; in cultures where nudity was accepted, nude figures in painting and sculpture were as well. However, some cultures have tolerated artistic nudity more than actual nudity, with a different set of standards of what is acceptable. Sometimes live nudity is more acceptable if the model does not move.

As social attitudes about artistic nudity have changed, this has sometimes led to conflict over art that no longer conforms to prevailing standards. For example, the Roman Catholic Church once organized the so-called fig-leaf campaign to cover nudity in art, starting from the works of Renaissance artist Michelangelo.

The nude has become an enduring genre of representational art, especially painting, sculpture, and photography. It depicts people without clothes on, usually with stylistic and staging conventions that distinguish the artistic elements (such as innocence, or similar theatrical/artistic elements) of being nude with the more provocative state of being naked. A nude figure is one, such as a goddess or a man in ancient Greece, for whom the lack of clothing is its usual condition, so that there is no sexual suggestiveness presumed. A naked figure is one, such as a contemporary prostitute or a businessman, who usually wears clothing, such that their lack of it in this scene implies sexual activity or suggestiveness. The latter were rare in European art from the Medieval period until the latter half of the 1800s; in the interim, a work featuring an unclothed woman would routinely identify her as "Venus" or another Greco-Roman goddess, to justify her nudity.

Nudity in art, also publicly displayed, is rather common and more accepted than public nudity of real people. For example, a statue or painting representing a nude person may be displayed in public places where actual nudity is not allowed. However, there is also much art depicting a nude person with a piece of cloth seemingly by chance covering the genitals.

A 1960s sketch featuring English comedians Peter Cook and Dudley Moore admiring Cezanne's "Les Grandes Baigneuses" in the National Gallery humorously suggested that there must be hundreds of paintings that are not publicly displayed because the pieces of cloth did not fall in just the right places while the artist was painting them.

In modern media, images of partial and full nudity are used in advertising to draw additional attention. In the case of attractive models this attention is due to the visual pleasure the images provide; in other cases it is due to the relative rarity of images of nudity. The use of nudity in advertising tends to be carefully controlled to avoid the impression that the company whose product is being advertised is indecent or unrefined. There are also limits on what advertising media such as magazines allow. The success of sexually provocative advertising is claimed in the truism "sex sells". However, responses to nudity in American advertisements have been more mixed; nudity in the advertisements of Calvin Klein, Benetton, and Abercrombie & Fitch, to name three companies, have provoked much negative as well as positive response.

Of images of nudity (not necessarily pornographic), the most extreme form is full frontal nudity, referring to the fact that the actor or model is presented from the front and including "everything", indicating that the genitals are exposed. Frequently images of nude people do not go that far and photos are deliberately composed, and films edited, such that in particular no genitalia are seen, as if the camera failed to see them by chance. This is sometimes called "implied nudity" as opposed to "explicit nudity".

The portrayal of nudity in motion pictures and television has long been controversial. Full nudity has gained much wider acceptance in European cinema and television, where in contrast to their US counterparts the audience perceive nudity and sexuality in general as less objectionable than the depiction of violence.

Broadcast television and most "basic cable" outlets in the United States have been more reluctant to display nudity in most cases, the exception being PBS. A few series in the 1990s, including NYPD Blue, have occasionally used partial nudity, both male and female. When broadcast on television, theatrically released films featuring nudity are usually presented with the nude scenes edited out, or the nudity is obscured in some fashion (for example digital imagery may be used to clothe nude actors). Several premium cable services such as HBO and Showtime have gained popularity for, among other things, presenting unedited films. In addition, they have produced series that do not shy away from nude scenes, including Oz, Sex and the City, The Sopranos, and Queer as Folk.

Other depictions in vernacular culture

Nudity is occasionally presented in other media as well, often with attending controversy. Album cover art featuring nude photographs, featuring music by performers such as Jimi Hendrix, John Lennon and Yoko Ono, Blind Faith, and Jane's Addiction, have stirred controversy over the years. Several rock musicians have performed nude on stage, including members of Jane's Addiction, Rage Against the Machine, Green Day, The Jesus Lizard, Red Hot Chilli Peppers, blink-182, and The Bravery.

Television soap operas have rarely shown any risque nudity, the exception being the Procter & Gamble soap operas As the World Turns and Guiding Light which in 2005 went as far as featuring rear male nudity during lovemaking scenes. After the Janet Jackson Super Bowl XXXVIII halftime show controversy, FCC commissioner Michael J. Copps stated that it was time for a crackdown on daytime television and indicated that he was reviewing whether soap operas were violating the agency's indecency prohibitions. Following this news, Guiding Light edited out nudity from an episode that had already been taped. A week later, the show's executive producer John Conboy was fired and replaced by Ellen Wheeler. All nine American network soaps began to impose an unwritten rule of avoiding any sort of risque adult scenes.

On the Internet, especially on websites featuring images of well known people, the terms nude and nudity have often been used (some would say misused) to signify indecent exposure; for example, a photo of an otherwise fully clothed woman with a nipple exposed.

An exception is often made for the depiction of peoples whose nudity is acceptable within the mores of a traditional culture. This so-called "ethnographic" nudity has appeared in National Geographic magazine, as well as documentaries broadcast in the United States. In some cases, media outlets may show nudity which occurs in a "natural" or spontaneous setting in news programs or documentaries, while blurring out or censoring the nudity in a dramatic work.

In soft core pornography, which was originally presented mainly in the form of "men's magazines", it was barely acceptable to show a glimpse of nipple in the 1950s. By the 1970s, in such mainstream magazines as Playboy and Hustler, no region of the body was considered off limits. Meanwhile, a growing business of hardcore pornography has developed, including photo magazines and motion pictures, in which total nudity (and any variety of sexual activity) is commonplace.

Originally, nude dancing was mainly presented in the form of the "strip-tease". This was generally a stage show in which the dancer progressively removed her clothing while dancing to music. Prominent early- to mid-twentieth century "strip-tease artists" such as Gypsy Rose Lee rarely included total nudity as part of their sometimes quite elaborate acts. Now most "exotic" dancers perform topless (independent of gender, of course), perhaps wearing a thong bottom. In the 1970s, on an official level, men entered the strip club field, performing partially-unclothed dances primarily at clubs aimed for heterosexual women (the Chippendales being the most common example). Both genders had been unofficially dancing at clubs for many years (at least since the 1950's), and today at clubs catering to gay, straight, and everything in-between clientele.

Art of the 20th century


"The Second Temple of Beauty"