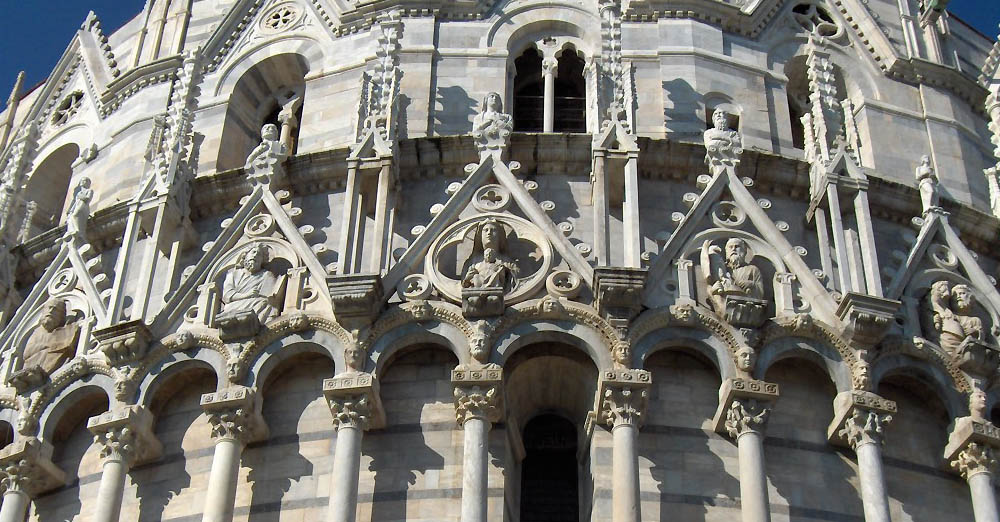 Interior of the Baptisery in Pisa 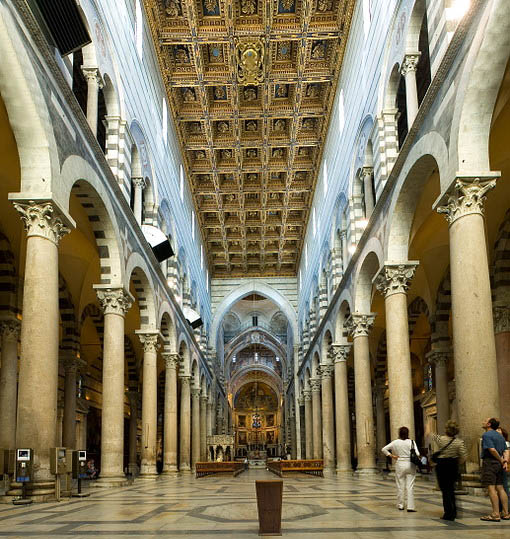 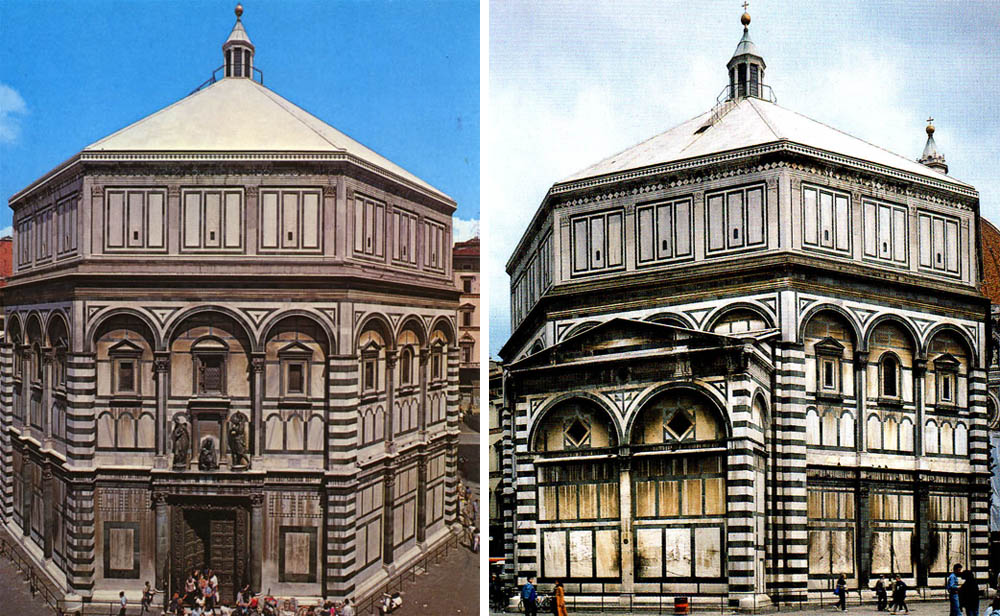 
In Florence, which was to outstrip Pisa commercially and artistically, the greatest achievement of the Tuscan Romanesque is the Baptistery (fig. 421), opposite the Cathedral. It is a domed octagonal structure of impressive size. Here the green-and-white marble paneling follows severe geometric lines, and the blind arcades are extraordinarily classical in proportion and detail. The entire building, in fact, exudes so classical an air that the Florentines themselves came to believe, a few hundred years later, that it had originally been a temple of Mars. And even today the controversy over its date has not yet been settled to everyone's satisfaction. We shall return to this baptistery a number of times, since it was destined to play an important role in the Renaissance. 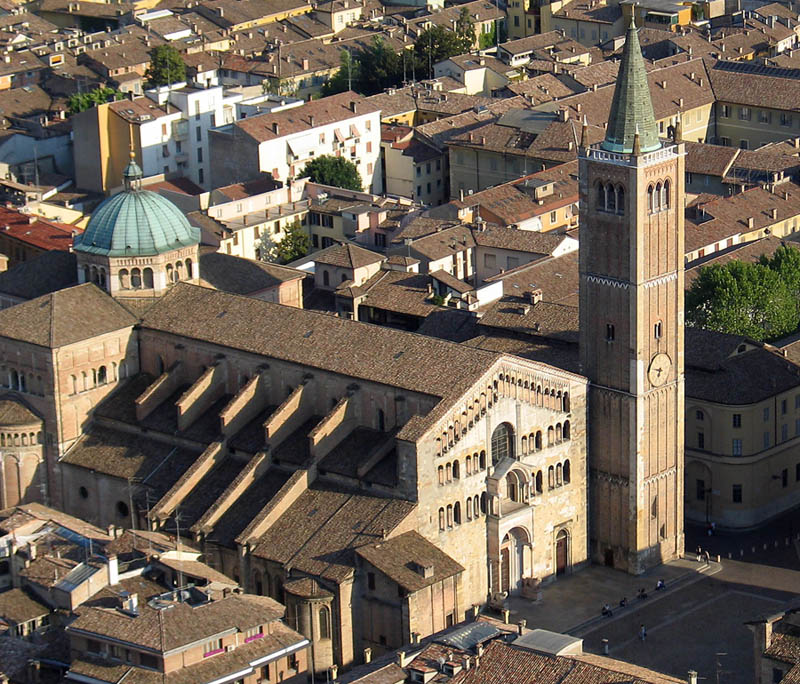 
Parma Cathedral (Duomo) is a cathedral church in Parma, Emilia-Romagna (Italy). It is an important Italian Romanesque cathedral: the dome, in particular, is decorated by a highly influential illusionistic fresco by Renaissance painter Antonio da Correggio.

The construction was begun in 1059 by bishop Cadalo, later antipope with the name of Honorius II, and was consecrated by Paschal II in 1116. A basilica existed probably in the 6th century, but was later abandoned; another church had been consecrated in the rear part of the preceding one in the 9th century by the count-bishop Guibodo. The new church was heavily damaged by an earthquake in 1117 and had to be restored. Of the original building, remains can be seen in the presbytery, the transept, the choir and the apses, and in some sculpture fragments. The wide façade was completed in 1178: it has three loggia floors and three portals, whose doors were sculpted by Luchino Bianchino in 1494. Between the central and the right doors is the tomb of the mathematician Biagio Pelacani, who died in 1416.

The Gothic belfry was added later, in 1284-1294: a twin construction on the left side had been conceived, but it was never begun. Beside the Cathedral lies the octagonal Baptistry of Parma.

The Cathedral of Teruel is a church in Teruel, Aragon, Spain. Entitled to St. Mary, it is a notable example of Mudéjar architecture. Together with other churches in the town and in the province of Zaragoza, is listed in the UNESCO Heritage site Mudéjar Architecture of Aragon since 1986.

The cathedral traces its origins to the foundation of the town by Alfonso II of Aragon, who ordered the construction of a church, entitled to St. Mary de Mediavilla, in Romanesque style. In the late 13th century, the morisco architect Juzaff restructured it, rising the nave and the two aisles, and giving them a Mudéjar appearance. The Mudéjar bell tower was finished in 1257. The Romanesques apses where replaced by Gothic-Mudéjar ones in the 14th century.

In 1423 Pope Benedict XII, of Aragonese origins, elevated it to the rank of collegiate. In 1538 was built the dome in the nave, a work of Martín de Montalbán. It has an octagonal plan with, on the external side, double mullioned windows with Plateresque decorations. In 1587, with the creation of the diocese of Teruel, the church was promoted to the cathedral role e reconsecrated.

The facade, in neo-Mudéjar style, was finished in 1909.

The Cathedral of Teruel, Aragon, Spain 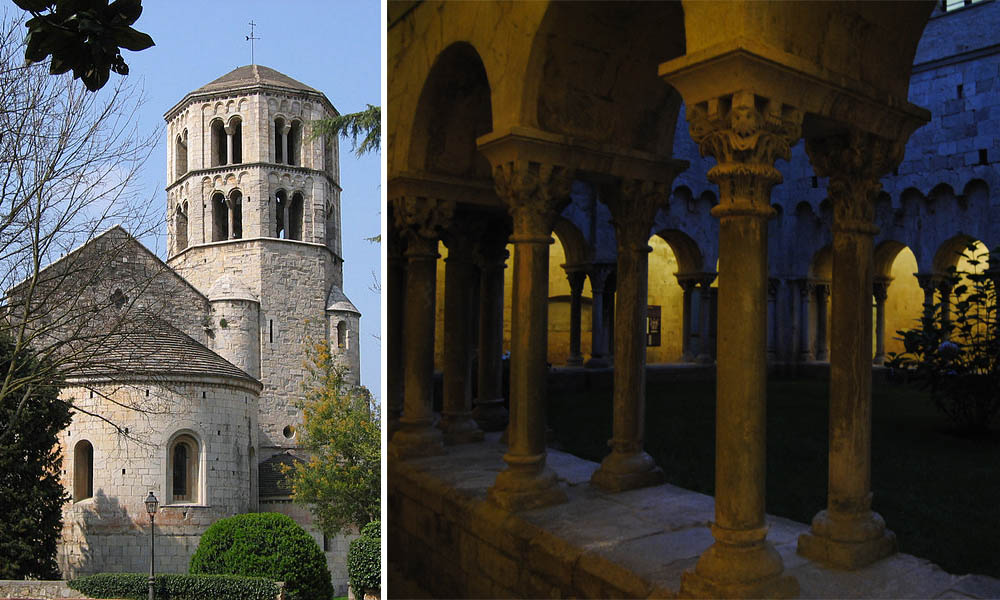 Sant Pere de Galligants is Benedictine abbey in Girona, Catalonia, Spain. Since 1857, it is home to the seat of the Archaeological Museum of Catalonia in the city.

The monastery was built from 992, outside the walls of Girona, when Ramon Borrell, count of Barcelona gave to the monks rights over the quarter of Sant Pere. The monks held the ruler of the quarter until 1339, when King Peter IV of Aragon restored it to Aragon.

In 1117 Ramon Berenguer III of Barcelona united the monastery to the Abbey of Sainte-Marie de Lagrasse, in what is now France, though Sant Pere kept an abbot of his own and a large degree of autonomy. Sant Pere was never a big community, and the church was not the local parish, and only baptisms were held in the monastery. It started to decay from the 15th century, and in 1592 it was united to the also decaying monasteries of Sant Miquel de Cruïlles and Sant Miquel de Fluvià. In 1835 the monastery included an abbot and four monks. It was declared a national monument in 1931. In 1362, when the monastery was enclosed within the city's walls, it was redesigned to a more defensive shape. 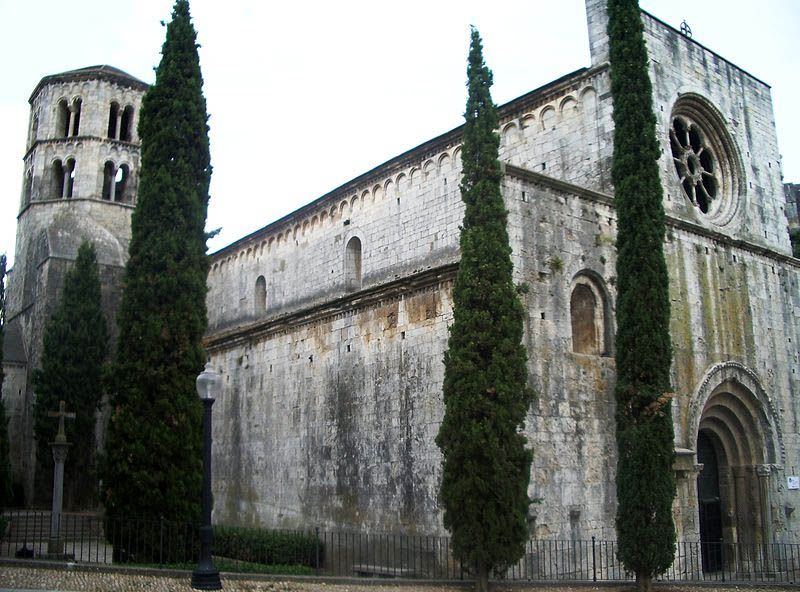 The small cloister is an example of Catalan Romanesque architecture. The northern gallery dates to 1154, while the remaining ones are from 1190. The capitals of the columns have motifs very similar to those in the cloisters of Sant Cugat del Vallès or in the Cathedral of Girona. Some depict scenes from Jesus' life, while others show typical Romanesque elements such as lions or sirens. The current church was built in 1130, and has a nave and two aisles with a transept, and four apses. The portal, in a rather archaic style, comes probably from a previous building. It is surmounted by a rose window with a diameter of 3.5 meters.

The interior features a series of side columns, with capitals having vegetable motifs, used to reinforce the central vault. The capitals of the apse columns are more elaborated, and were probably executed by different artists. Some of them have been attributed to the Master of Cabestany.

The bell tower has an octagonal plan and two sectors, the upper one, of two floors featuring with double arches divided by columns, decorated with Lombard bands. 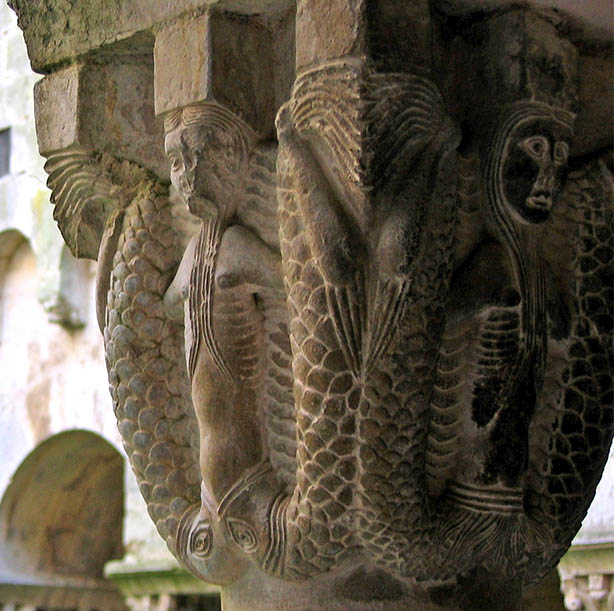 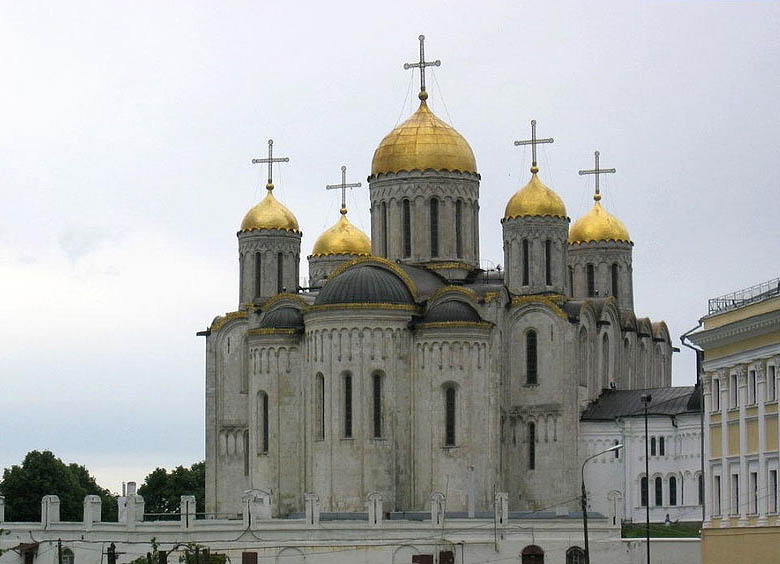 Church of the Dormition, Vladimir, Russia

Dormition Cathedral in Vladimir (sometimes translated Assumption Cathedral) used to be a mother church of medieval Russia in the 13th and 14th centuries. It is part of the World Heritage Site entitled White Monuments of Vladimir and Suzdal.

The cathedral was commissioned by Andrew the Pious in his capital Vladimir and dedicated to the Dormition of the Theotokos (Virgin Mary), whom he promoted as the patron saint of his lands. Originally erected in 1158-1160, the 6-pillared 5-domed cathedral was expanded in 1185-1189 to reflect the augmented prestige of Vladimir. Embracing the area of 1178 sq. meters, it remained the largest of Russian churches for the following 300 or 400 years.

Andrew the Pious, Vsevolod the Big Nest, and other rulers of Vladimir-Suzdal were interred in the crypt of this church. Unlike many other churches, the cathedral survived the great devastation and fire of Vladimir in 1239, when the Mongol hordes of Batu Khan took hold of the capital.

The exterior walls of the church are covered with elaborate carvings. The interior was painted in the 12th century and then repainted by the great Andrei Rublev and Daniil Chernyi in 1408. The Dormition Cathedral served as a model for Aristotele Fioravanti when he designed the eponymous cathedral in the Moscow Kremlin in 1475-1479. A lofty belltower, combining genuinely Russian, Gothic, and Neoclassical influences, was erected nearby in 1810.