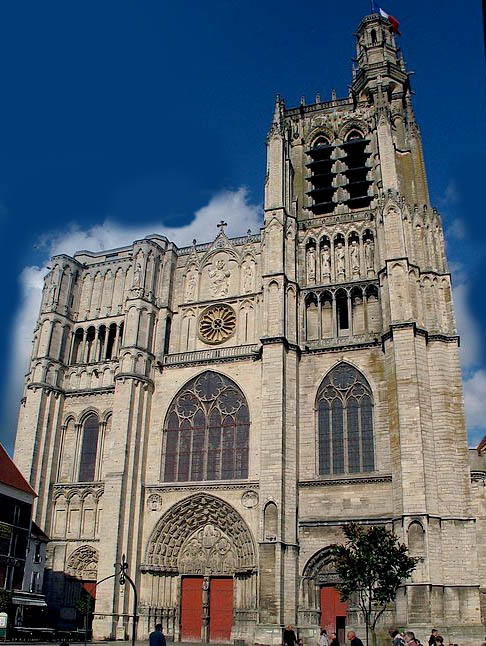 
Sens Cathedral (French: Cathédrale Saint-Étienne de Sens) is a Catholic cathedral in Sens, Bourgogne, eastern France. It was one of the earliest Gothic buildings in the country, and the largest of the early Gothic churches. The choir was begun in 1140. As was typical in cathedral construction work progressed westwards, building the nave, with the west front completed around 1200. The structure was finally completed in the 16th century. The architecture of its choir influenced, through the architect William of Sens, that of the choir of Canterbury Cathedral.

Sens was a place of considerable importance in the 12th century, seat of the "Primate of Gaul" and superior to the bishopric of Paris. The cathedral church was therefore built on a large scale according to the latest principles. Sens' nave is unusually wide, and the church is larger in overall scale than its contemporaries at Saint Denis, Noyon or Senlis. As is typical with early gothic architecture, the vaulting is sexpartite, surmounting a modest clerestory, with alternating piers and columns between bays. Sens may have been the first church to be completely vaulted in this manner. A gallery opens into the roof space between the aisle arcade and the clerestory. The interior elevation resembles that of Le Mans, but with less massive walls. Flying buttresses were originally employed on the outside, but were replaced with new ones in the thirteenth century. Sens did not initially have transepts; these were only completed in the late 13th and early 14th centuries in the late Gothic rayonnant style.

The building is noted more for its solidity than beauty of proportion or richness of ornamentation. The west front is pierced by three portals; that in the middle has good sculptures, representing the Parable of the Ten Virgins and the story of St Stephen. The right-hand portal contains twenty-two statuettes of the prophets, which have suffered considerable damage. Above this portal rises the stone tower, decorated with armorial bearings and with statues representing the principal benefactors of the church. The bells in the campanile by which the tower is surmounted enjoyed immense reputation in the Middle Ages; the two which still remain, La Savinienne and La Potentienne, weigh respectively 15.3 tons and 13.8 tons. The left portal is adorned with two bas-reliefs, Liberality and Avarice, as well as with the story of John the Baptist. The portal on the north side of the cathedral is one of the finest examples of French 16th-century sculpture; that on the south side is surmounted by magnificent stained-glass windows. Other windows of the 12th to the 16th century are preserved, some of them representing the legend of Thomas Becket of Canterbury.

Among the interior features are the tomb of Louis, Dauphin of France (son of Louis XV) and his consort, Marie-Josèphe of Saxony, one of the works of Guillaume Coustou the Younger, and bas-reliefs representing scenes from the life of Cardinal Antoine Duprat, chancellor of France and archbishop of Sens from 1525 to 1535. The mausoleum from which they came was destroyed in the French Revolution.

The cathedral treasury, one of the richest in antiquities in France, contains a fragment of the true cross presented by Charlemagne, and the vestments of Thomas Becket. The treasury is now kept at a museum. 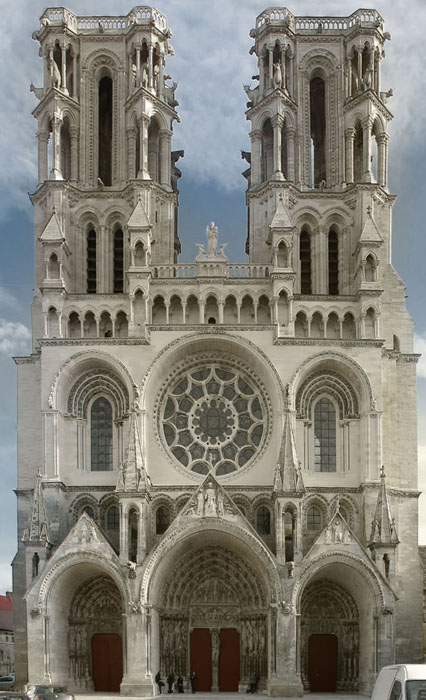 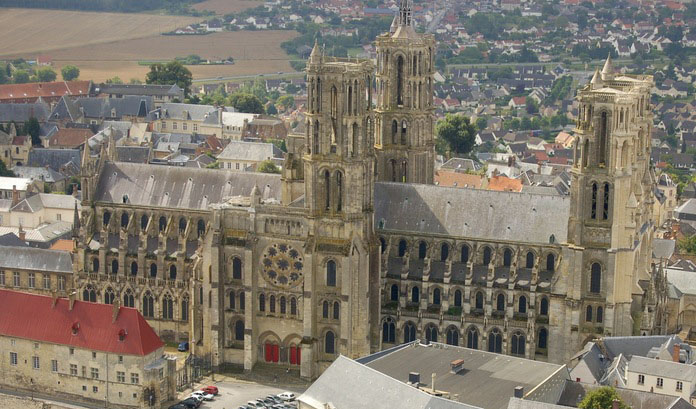 Laon Cathedral (Cathédrale Notre-Dame de Laon) is one of the most important examples of the Gothic architecture of the 12th and 13th centuries, earlier than the cathedrals of Sens and Notre Dame of Paris and ranking with them in importance. It is located in Laon, Picardy, France, and is the seat of the Bishop of Laon. It has been listed among the Monuments Historiques since 1840.
The current cathedral is built on the site of an earlier edifice commenced under the episcopacy of Gerfrid (774 - 800). That Carolingian cathedral was consecrated on 6 September 800 in the presence of the emperor himself

The Carolingian building was replaced under Bishop Élinand (1052–1095). The present new building was inaugurated with the second coronation of the future King Philip I. This cathedral was torched during the Easter Insurrection on 25 April 1112. During the revolt Laon's unpopular Bishop Waldric (in French Gaudry) was killed, despite taking the precaution of hiding in a barrel in the cellar of the episcopal palace. The cathedral was not destroyed, however, and after a repair programme lasting two years it was rededicated in 1114 under Bishop Barthélemy de Jur.

The present Laon Cathedral dates from the 12th and early 13th centuries, an early example of the Gothic style that originated in Northern France. The former cathedral was burned out and damaged during the communal insurrection in 1112, occasioned by the revocation of the commune's charter. The present reconstruction began with a choir in about 1160 and was finished as far as the east side of the transept by 1174. In a second campaign, which started about 1180, the nave was built, and completed after 1205. Then the choir was replaced by the greatly lengthened present choir in 1215.

The building is cruciform, and the choir terminates in a straight wall instead of in an apse. Of the seven planned towers flanking the façades, only five are complete to the height of the base of the spires, two at the west front, with life-size figures of oxen beneath the arcades of their upper portion, two more, one at each end of the transept, and a square central crossing tower that forms a lantern illuminating the crossing.

The west front, with three porches, the centre one surmounted by a fine rose window of 1210, ranks next to that of Notre Dame de Paris in the purity of its Gothic style. Because of the use of white stone in the interior, however, the luminosity is remarkably greater than at Notre-Dame. The cathedral has stained glass of the 13th century and a chancel screen of the 18th century. Although the cathedral suffered some damage during the French Revolution and the Franco-Prussian War of 1870, it escaped both World Wars unharmed. 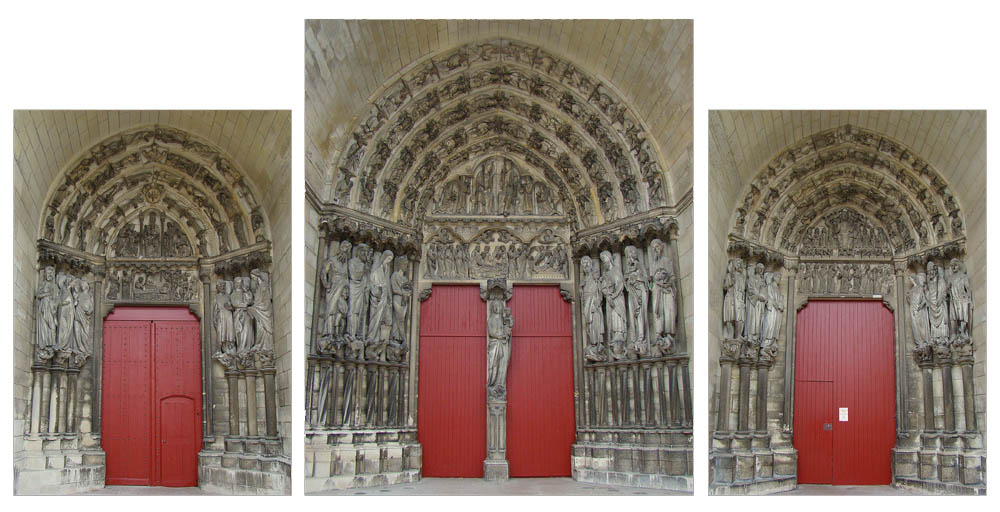 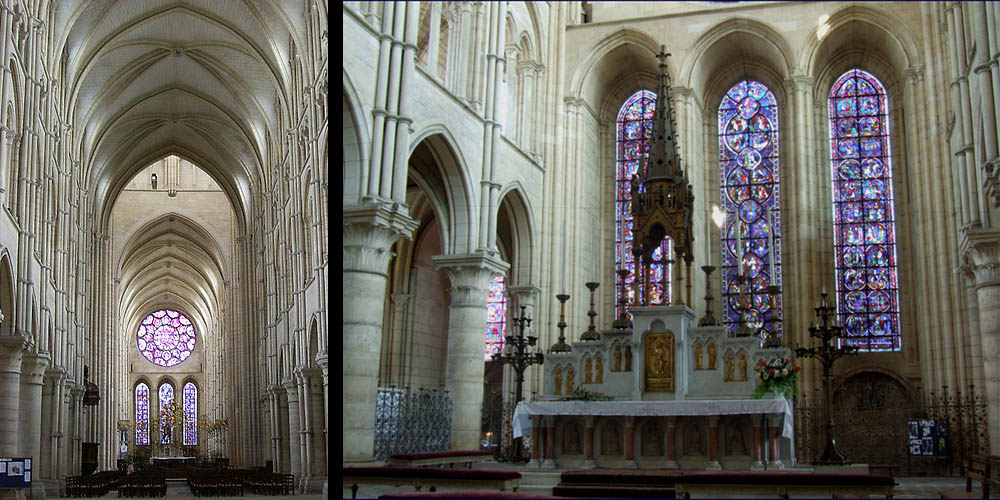 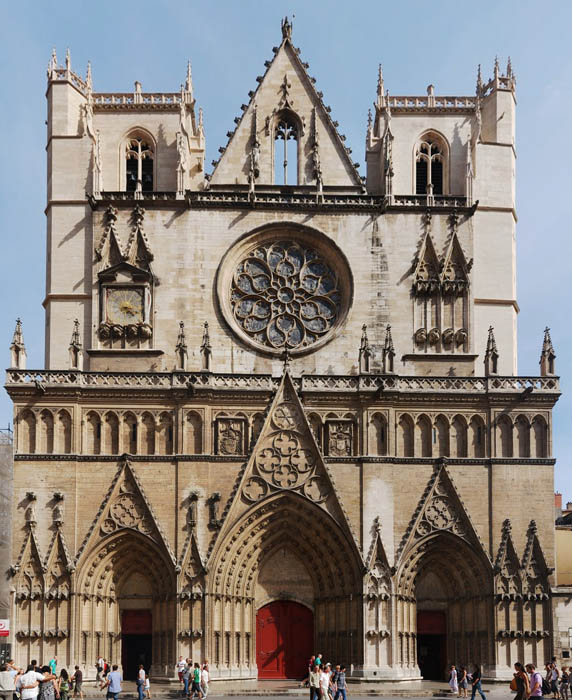 
Lyon Cathedral (Cathédrale Saint-Jean-Baptiste de Lyon) is a Roman Catholic cathedral in Lyon, France, the seat of the Archbishop of Lyon.

It was founded by Saint Pothinus and Saint Irenaeus, the first two bishops of Lyon. The cathedral is also known as a "Primatiale" because in 1079 the Pope granted to the archbishop of Lyon the title of Primate of All the Gauls with the legal supremacy over the principal archbishops of the kingdom.

Begun in the twelfth century on the ruins of a 6th century church, it was completed in 1476. The building is 80 metres long (internally), 20 metres wide at the choir, and 32.5 metres high in the nave. The cathedral organ was built by Daublaine and Callinet and was installed in 1841 at the end of the apse and had 15 stops. It was rebuilt in 1875 by Merklin-Schütze and given 30 stops, three keyboards of 54 notes and pedals for 27.

Noteworthy are the two crosses to right and left of the altar, preserved since the council of 1274 as a symbol of the union of the churches, and the Bourbon chapel, built by the Cardinal de Bourbon and his brother Pierre de Bourbon, son-in-law of Louis XI, a masterpiece of 15th century sculpture.

The cathedral also has an astronomical clock from the 14th century.

Until the construction of the Basilica of Notre-Dame de Fourvière, it was the pre-eminent church in Lyon. 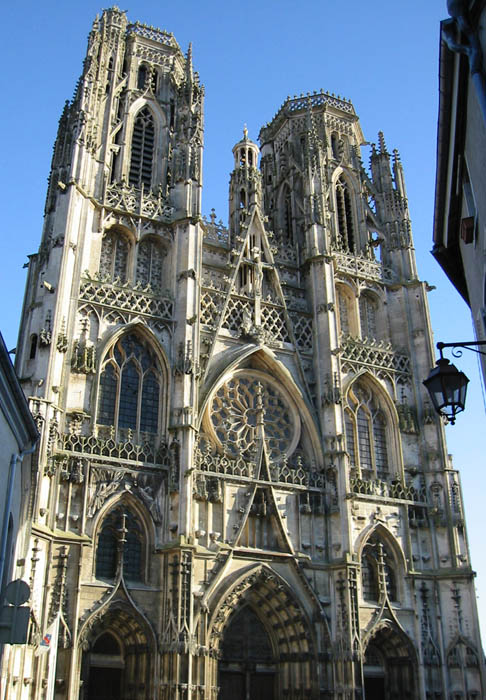 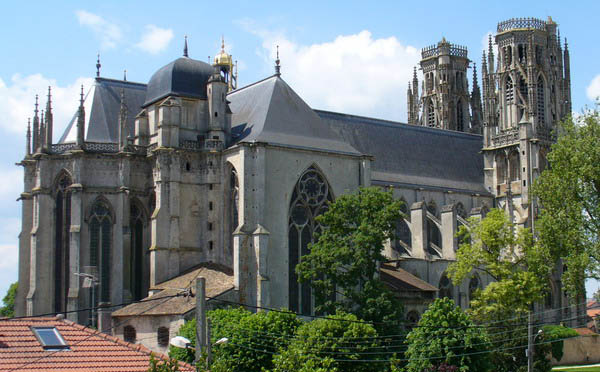 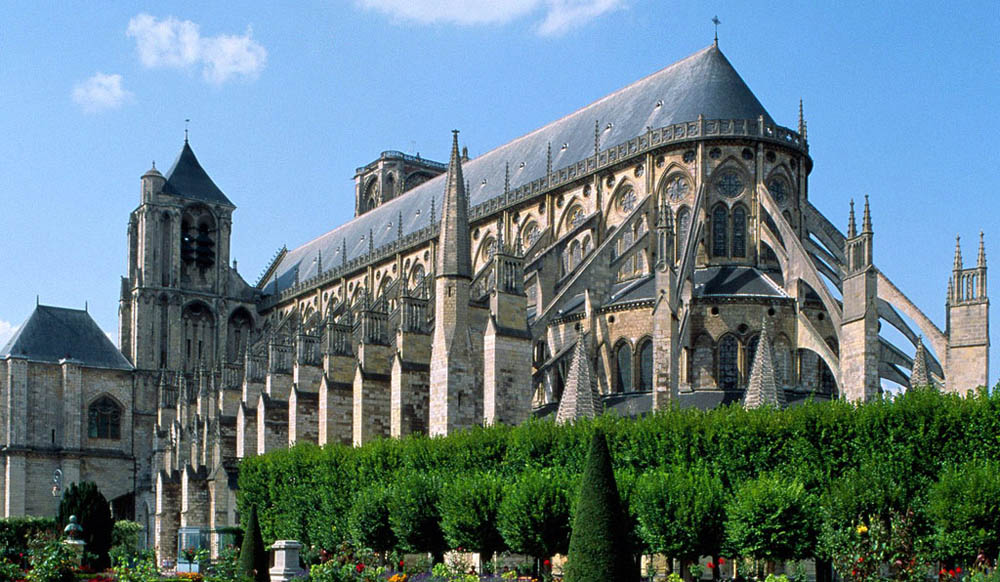 
Bourges Cathedral (Cathédrale Saint-Étienne de Bourges) is a Roman Catholic cathedral, dedicated to Saint Stephen, located in Bourges, France. It is the seat of the Archbishop of Bourges.

The site occupied by the present cathedral, in what was once the northeastern corner of the Gallo-Roman walled city, has been the site of the city's main church at least since Carolingian times and probably since the foundation of the bishopric in the 3rd century. The present Cathedral was built as a replacement for a mid 11th century structure, traces of which survive in the crypt. The date when construction began is unknown, although a document of 1195 recording expenditure on rebuilding works suggests that construction was already underway by that date. The fact that the east end protrudes beyond the line of the Gallo-Roman walls and that royal permission to demolish those walls was only granted in 1183 shows that work on the foundations cannot have started before that date. The main phase of construction is therefore roughly contemporaneous with Chartres Cathedral (begun 1194), some 200 km to the northwest. As with most Early- and High-Gothic cathedrals, the identity of the architect or master-mason is unknown. The choir was in use (though not necessarily complete) by 1214 and the nave was finished by 1255. The building was finally consecrated in 1324. Most of the west façade was finished by 1270, though work on the towers proceeded more slowly, partly due to the unfavourable rock strata beneath the site. Structural problems with the South tower led to the building of the adjoining buttress tower in the mid-14th century. The North tower was completed around the end of the 15th century but collapsed in 1506, destroying the Northern portion of the facade in the process. The North tower and its portal were subsequently rebuilt in a more contemporary style.

Important figures in the life of the cathedral during the 13th century include William of Donjeon who was Archbishop from 1200 until his death in 1209 (and was canonised by the Pope in 1218 as St William of Bourges) as well as his grandson, Philip Berruyer (archbishop 1236-61), who oversaw the later stages of construction.

Following the destruction of much of the Ducal Palace and its chapel during the revolution, the tomb effigy of Duke Jean de Berry was relocated to the Cathedral's crypt, along with some stained glass panels showing standing prophets, which were designed for the chapel by André Beauneveu.

Generally the cathedral suffered far less than some of its peers during the French Wars of Religion and in the Revolution. Its location meant it was also relatively safe from the ravages of both World Wars. 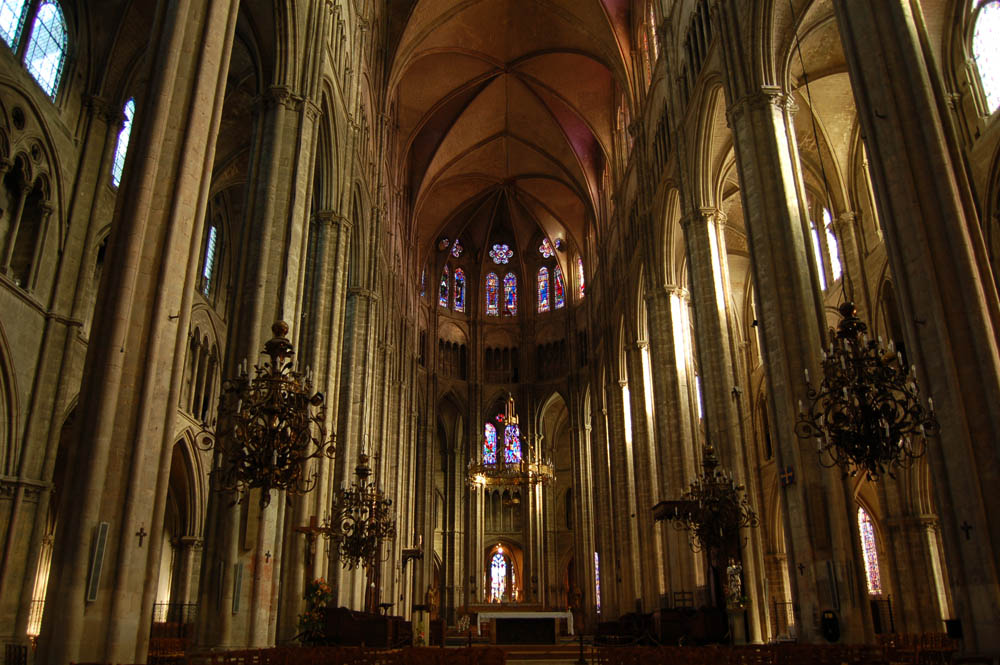