1921, in other words, two years after Gropius had founded the Bauhaus, four years after De Stijl had first appeared in the Netherlands and a whole seven years after the first sketches for his "Domino" frame system, Le Corbusier employed a concept in an article in the magazine "L'Esprit Nouveau" which expressed nothing less than the re-invention of the house: the "machine for living in". "L'Esprit Nouveau" was a platform which he had created himself, and which he used, along with Amedee Ozenfant, to attack the - in France still dominant - traditions of the Ecole des Beaux-Arts, the "falsity, make-up and tricks of the courtesan" which it taught, and the "barren flourishes of its plans ... the foliage, pilasters and crowns" in which it immersed itself. "We have acquired a taste for clean air and full sunlight ... The house is a machine for living in, bathrooms, sun, hot and cold water, temperature which can be adjusted as required, food storage, hygiene, beauty in harmonious proportions. A chair is a machine for sitting in: Maple showed us the way. Basins are machines for washing in: Twyford invented them. With the exception of the lime-blossom or camomile teatime hour, modern life, the world of our activity, has created its own objects: clothing, the fountain pen, the razor blade, the typewriter, the telephone, wonderful office furniture ... the 'Innovation' suitcase ... the limousine, the ocean liner and the airplane."

Le Corbusier demonstrated in comprehensive sets of drawings how his passionate calls for a new contemporary architecture could be realized in practice. He firstly applied the industrial principle of factory buildings to a framework for individual design. In his "Maison Domino", a grid of supports and continuous load-bearing ceilings formed a skeleton which, with the insertion of as many walls as desired, enabled an endless variety of plans to be created within the same construction system. In

1920 he designed the "Maison Citrohan", in which two load-bearing walls delimited the sides of a cuboid, opened in between by generous windows and entered via an outside staircase. In 1922, Le Corbusier published a design for a new city entitled "Une Ville contemporaine". The commercial centre comprised cruciform office towers grouped around an airport, and was surrounded by grassy shopping arcades, leisure facilities and slim apartment blocks. But with its long avenues and the rigid central symmetry of its visual axes, the overall plan remained almost baroque and the whole a Utopian fantasy. Le Corbusier built only single houses in the twenties, which only came together to form an estate in Pessac. After much dispute he succeeded at least in demonstrating his concept of Immeubles-Villas in the scale model of a housing unit shown at the Paris Exposition Internationale of 1925. He recommended visitors to picture the pavilion fifteen metres above the ground as part of a concentrated block system.

For Le Corbusier, the only conceivable basis for an architecture corresponding to the precise world of machines was geometry: prisms, cubes, cylinders, pyramids and spheres as "pure volumes". Concept and rhythm should obey equations just as in mathematics, while self-imposed "size regulators" should curb the arbitrariness which endangered the "beneficial effect of order". Although the unfamiliar new forms of his buildings and their experimental details at times defeated their builders, often leading to considerable structural defects, they proved that architecture which conforms to mathematical premisses can be more than mechanical stereometry. Examples here include the Vaisons La Roche and Jeanneret-Raaf in Auteuil, the Villa Stein in Garches and the Villa Savoye in Poissy. This is architecture as the "masterly, correct and magnificent play of masses brought together in light", as Le Corbusier stated in his "Three Reminders to Architects". In 1927, in conjunction with his buildings for the Weifienhof Estate in Stuttgart, Le Corbusier formulated his "fundamentally new aesthetic", as he humbly called it, in a five-point programme whose essential elements were the pilotis, the roof garden, the free plan, the strip window and the free facade composition. Single posts took the place of walls: "These pilotis are placed at the same specific intervals, without taking into consideration the inner organization of the house. They rise directly from the ground ... and elevate the ground floor ... The building site remains the garden ... This area is regained on the flat roof ... as a rooftop terrace, a rooftop garden." That the city skyline in the age of reinforced concrete should be nothing but a "tete-a-tete between the stars and the shingles" was sheer anachronism to Le Corbusier's mind. He sought to overcome the traditional contrast of "front" - a facade exposed to traffic - and "back" - crammed into a narrow courtyard through the division into "top" and "bottom". "You simply reverse the plan, you flee the street, you strive towards the light." Le Corbusier increasingly abandoned the use of continuous intermediate ceilings and organized his plans around open, two-storey living halls.

Stairs were replaced by ramps, thus creating "architectural promenades". Above all, the outer wall lost its significance as a static element and became a "membrane of any desired thickness". Long, horizontal window bands replaced the traditional tall French windows, an innovation which

- today surprisingly -sparked a central debate among French Modernists similar to the discussion surrounding the flat versus gable roof in Germany. Even the progressive Auguste Perret insisted that windows should stand upright "like a man". But Le Corbusier took the destruction of the typical facade even further than this: "Through the balcony-like projection of the floor over the pilotis, the entire facade is extended beyond the building skeleton. It thereby loses its load-bearing character ... and thus has freedom of composition." A freedom which was only limited by the bounds of the technically possible.

In France, the most distinguished representative of the International Style during the 1920s was the Swiss-born architect Le Corbusier (Charles Edouard Jeanneret, 1886-1965). At that time he built only private houses—from necessity, not choice—but these are as important as Wright's Prairie School houses. Le Corbusier called them machines a habiter (machines to be lived in), a term intended to suggest his admiration for the clean, precise shapes of machinery, not the Futurist desire for "mechanized living." (The paintings of his friend Fernand Leger during those years reflect the same attitude; see fig. 1069. Le Corbusier was himself an excellent painter in this vein.) Perhaps he also wanted to imply that his houses were so different from conventional homes as to constitute a new species.

Such is indeed our impression as we approach the most famous of them, the Savove House at Poissy-sur-Seine (fig.

1186). It resembles a low, square box resting on stilts—pillars of reinforced concrete that form part of the structural skeleton and reappear to divide the "ribbon windows" running along each side of the box. The flat, smooth surfaces deny all sense of weight and stress Le Corbusier's preoccupation with abstract "space blocks."

In order to find out how the box is subdivided, we must enter it (fig.

1187). We then realize that this simple "package" contains living spaces that are open as well as closed, separated by glass walls. Within the house, we are still in communication with the outdoors: views of the sky and the surrounding terrain are everywhere to be seen. Yet we enjoy complete privacy, since an observer on the ground cannot see us unless we stand next to a window. The functionalism of the Savoye House thus is governed by a "design for living," not by mechanical efficiency. 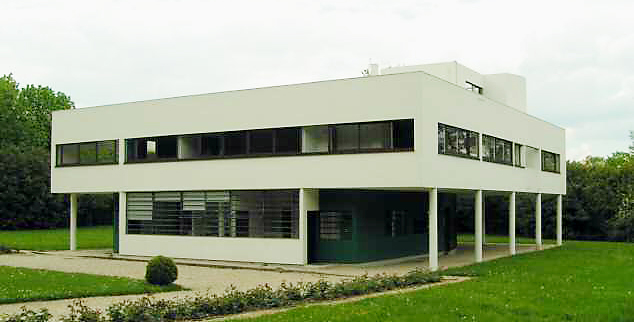 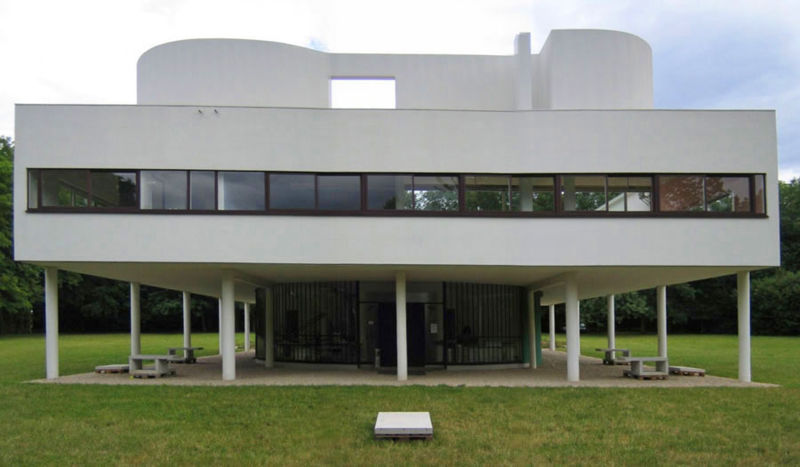 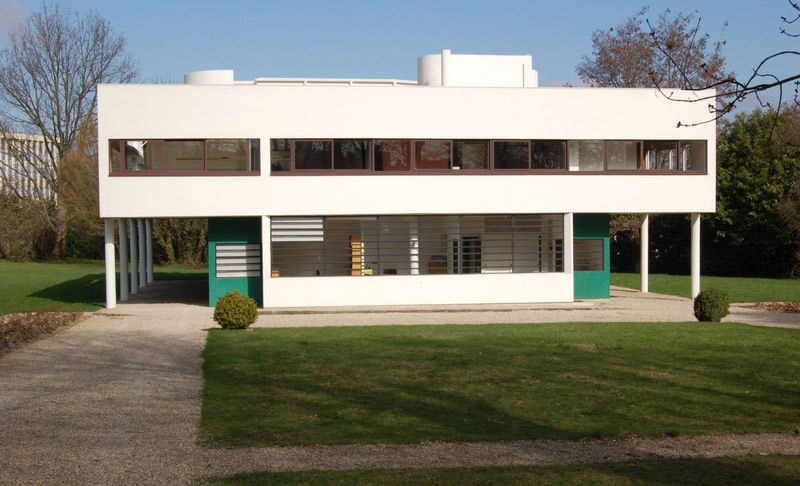 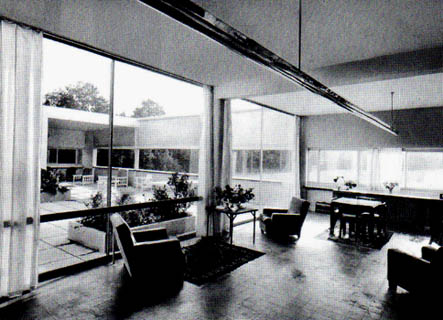 Terrace garden with a ramp leading up to the roof level, Savoye House
The bathroom with tiled divan bed, Savoye House

Abandoning the abstract purism of the International Style, Le Corbusier's postwar work shows a growing preoccupation with sculptural, even anthropomorphic, effects. Thus the Unite d'Habitation, a large apartment house in Marseilles (fig. 1197), is a "box on stilts" like the Savoye House, but the pillars are not thin rods. Their shape now expresses their muscular strength in a way that makes us think of Doric columns. The exposed staircase on the flank, too, is vigorously sculptural, and the flat plane of the all-glass facade has a honeycomb screen of louvers and balconies that forms a sunbreak but also enhances the three-dimensional quality of the structure. This projecting screen has proved to be an invention of great importance, practically and aesthetically: it is now a standard feature of modern architecture throughout the tropics. (Le Corbusier himself introduced it in India and Brazil). 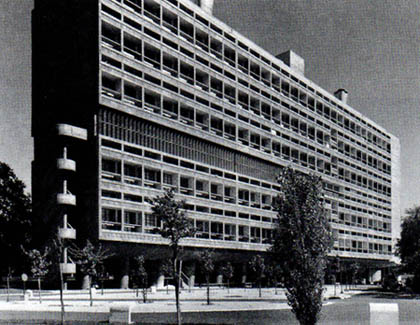 The most revolutionary building of the mid-twentieth century, however, is Le Corbusier's church of Notre-Dame-du-Haut at Ronchamp in eastern France (figs. 1198-1200). Rising like a medieval fortress from a hillcrest, its design is so irrational that it defies analysis, even with the aid of perspective diagrams. The play of curves and countercurves is here as insistent as in Gaudi's Casa Mila. though the shapes are now simple and more dynamic. The massive walls seem to obey an unseen force that makes them slant and curl like paper. And the overhanging root suggests the brim of an enormous hat, or the bottom of a ship split lengthwise by the sharp-edged buttress from which it is suspended.

This evocation of the dim, prehistoric past is quite intentional: asked to create a sanctuary on a hilltop, Le Corbusier must have felt that this was the primeval task of architecture, placing him in a direct line of succession with the builders of Stonehenge, the ziggurats of Mesopotamia, and the Greek temples. Hence, he also consciously avoids any correlation between exterior and interior. The doors are concealed; we must seek them out like clefts in a hillside. To pass through them is much like entering a secret—and sacred—cave.

Only inside do we sense the specifically Christian aspect of Ronchamp. The light, channeled through stained-glass windows so tiny that they seem hardly more than slits or pinpricks on the exterior, cuts widening paths through the thickness of the wall, and thus becomes once more what it had been in medieval architecture: the visible counterpart of the Light Divine. There is true magic in the interior of Ronchamp, but also a strangely disquieting quality, a nostalgia for the certainties of a faith that is no longer unquestioned. Ronchamp mirrors the spiritual condition of the modern age, which is a measure of its greatness as a work of art. 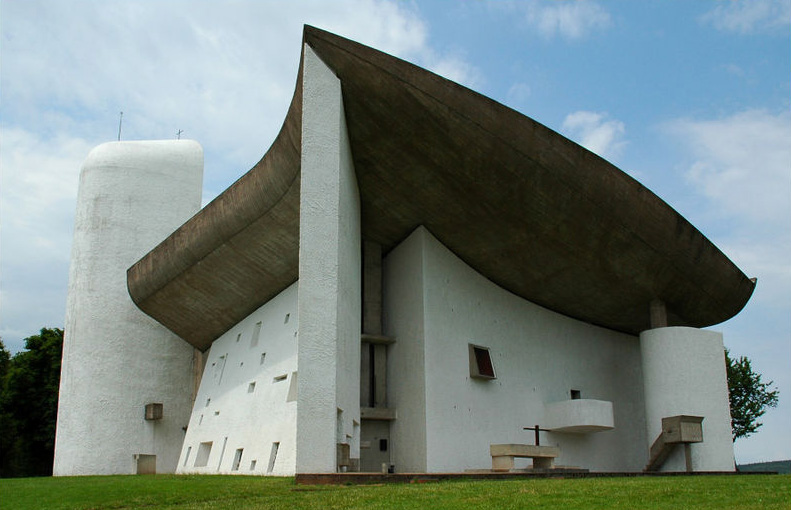 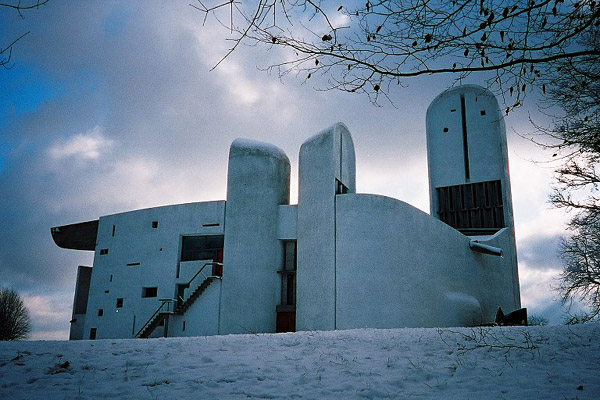 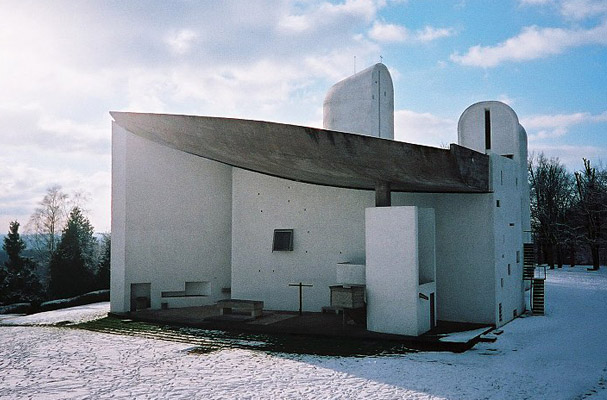 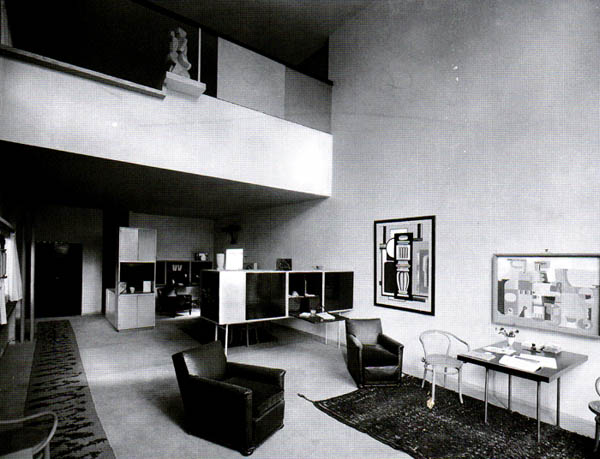 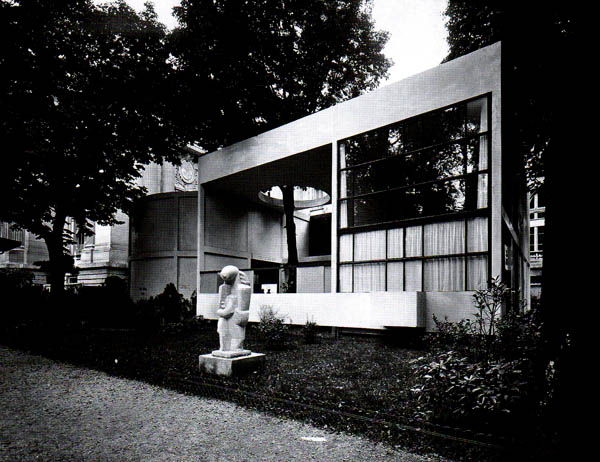 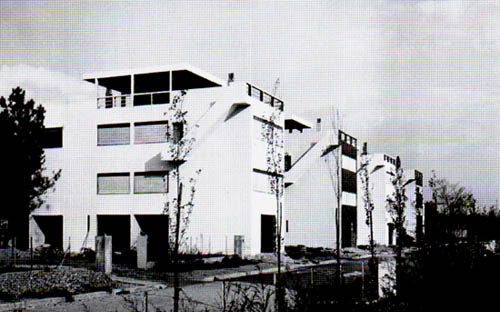 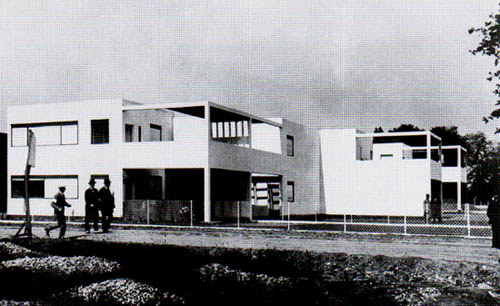 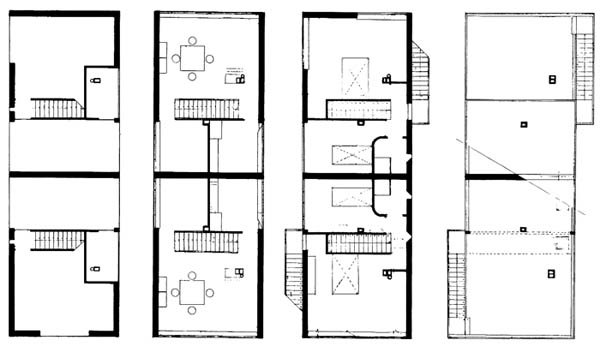 Plans of the "gratte-ciel" duplexes